The Fandom Rising by Anna Day

It’s a year since Violet, Alice and Katie escaped from the dystopian world of The Gallows Dance – Nate’s been stuck in a coma ever since. Violet re-enters The Gallows Dance, determined to bring her brother home. After an argument that threatens to destroy their friendship, Alice stays behind. But when a rogue fanfiction writer emerges online – writing dark new chapters set in the world her friends are trapped in – Alice is the only one with the power to save the story ... 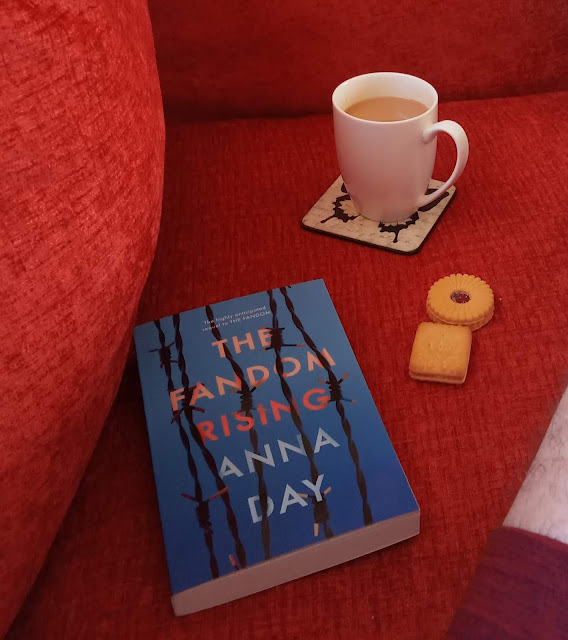 Anna Day's debut, The Fandom, was the very first review on this blog, and really the start of my interest in YA fiction. So how does the sequel match up?

It's very good. The Fandom was quite a clever, complex story about four friends crossing over from the real world into the world of their favourite dystopian novel/movie, and having to keep the story on track.  The Fandom Rising takes this idea to another level. Two of the characters find themselves trapped once again in the world of the Gallows Dance, but the loop has been broken and they have no story to follow. Meanwhile, Alice is trying to help them from our side of the looking glass.

The Fandom Rising takes a really interesting look at narratives in dystopia, and what it is the audience are actually looking for from these types of novels. I found the use of two perspectives really helped. It gives the novel pace and urgency, as actions in one world impact on the other, and it is a very interesting way to tackle the two worlds scenario.

I've always been on Team Alice, and I felt that she was treated quite unfairly by Violet in The Fandom, so I particularly enjoyed getting into her head as a POV character. This was really well done, as we see the complexities of Alice and how life really isn't perfect for her just because she's beautiful. I found the depiction of her home life and the contrasts with Violet's, to be really powerful, as was the way she felt like pretty much every male character was looking at her and judging her on her looks. It's something rarely seen, that kind of body-shaming based on her beauty and her "perfectness" and it was really interesting, though at times I did feel like screaming at her "Yes, we get it!"

Splitting the story into two like this does mean that each element gets less attention than it did in book one, and I did feel that some of the returning supporting characters did little more than stand around in the background. I felt like Katie must have spent most of her time thinking up ever more imaginative swears to call people, and Willow felt like he was barely there except for one crucial scene right at the end. His lack of presence in the book meant that this one moment of his didn't have the impact it could have done. It is very much Alice and Violet's book, at the cost of some of the other characters.

There were, however, some other emotional beats in the story that did work very well, and I was in tears by the last page. The conclusion, worked out across two worlds, is satisfying, though there is a slightly frustrating technique used of false twists and reveals, a technique that has really annoyed me from its overuse in another YA novel by another author.

The Fandom Rising builds beautifully on the groundwork of Anna's first novel, to deliver a clever, accomplished and often emotional story.

I'm giving it four and a quarter moons.

The Fandom Rising is published by Chicken House and is available now. I was sent a copy in return for this honest review.