My Box-Shaped Heart by Rachael Lucas

Holly's mum is a hoarder, and she is fed up with being picked on at school for being weird . . . and having the wrong clothes . . . and sticking out. All she wants is to be invisible. She loves swimming, because in the water everyone is the same.

Ed goes to the swimming pool to escape the horrible house he and his mum have been assigned by the women's refuge. In his old life he had money; was on the swim team; knew who he was and what he wanted. In his old life his dad hit his mum.

Holly is swimming in one direction and Ed's swimming in the other. As their worlds collide they find a window into each other's lives - and learn how to meet in the middle. 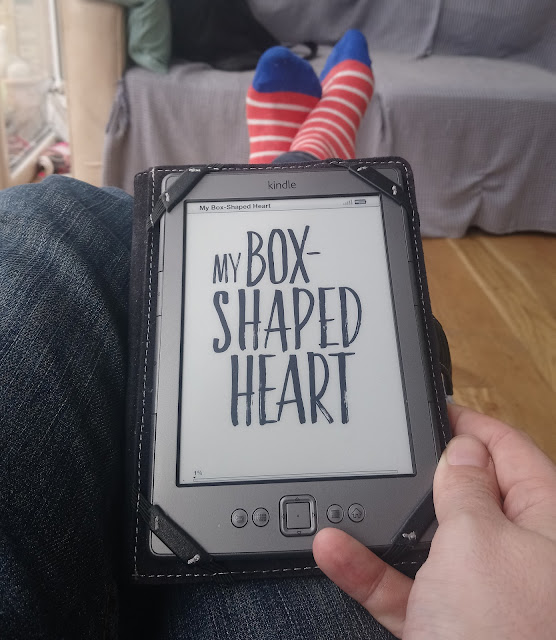 I honestly don't know how Rachael Lucas pulls this one off, but she does and it is simply wonderful!

My Box-Shaped Heart deals with so many big, serious issues. Holly's mum is struggling with her own mental health problems. Holly is having to care for her, and cope with everything on her own. She has problems at school and an awkward relationship with the girl who was her step-sister until their parents split up. Ed has his own parent problems he's trying to deal with. Neither of them fit in, and they're trying to figure out the relationship between them around all of this.

My Box-Shaped Heart should be heavy, hard hitting and emotional. It should leave the reader drained. Yet somehow it doesn't.

There's definitely an awful lot of emotion in there, don't get me wrong. This is a novel that packs a punch. And yet, somehow it wraps it up in beautiful prose that leaves you feeling warm, comfortable, possibly even slightly fuzzy. This is a novel that says "Yes, life is hard, people will let you down, but it's going to be okay." It's a novel I needed to read, and it's a novel I'll be reading again because it is so important to be reminded of that. That we're not alone, that we're not too weird, that we'll get through. It's lovely.

There's something else that struck me while I was reading My Box-Shaped Heart. Now I'm a very tactile person. My ex-wife regularly used to disapprove of the way I'd walk through shops touching things, just to get a feel for them. My Box-Shaped Heart is possibly the first book I've read where that sense of touch comes across really strongly in the writing.

"We're in a meadow full of wildflowers, and as we walk I run my hands along the tops of the grasses, feeling them tickling my palms."

"I press the flat of my hand against it for a second, feeling the way each little stone jabs into my palm."

Rachael's writing really pulls you into the story, with all of your senses engaged. It is very clever, and very well done.

I loved My Box-Shaped Heart, and I'm giving it five moons.

I was given an ecopy of the book via NetGalley in return for an honest review.