The Devil's Poetry by Louise Cole


“Don’t read it. Just keep it safe.”
Callie’s world is on the brink of all-out war, when the agent of the secret Order of Sumer gives her an ancient manuscript. He says she can bring peace just by reading from it. But as she finds herself running from demons and assassins, Callie realises her allies are just as ruthless as the pitiless Cadaveri who want her dead. Dare she read this book, without knowing the price? And, crucially, can she vanquish her own demons in time to save the world? 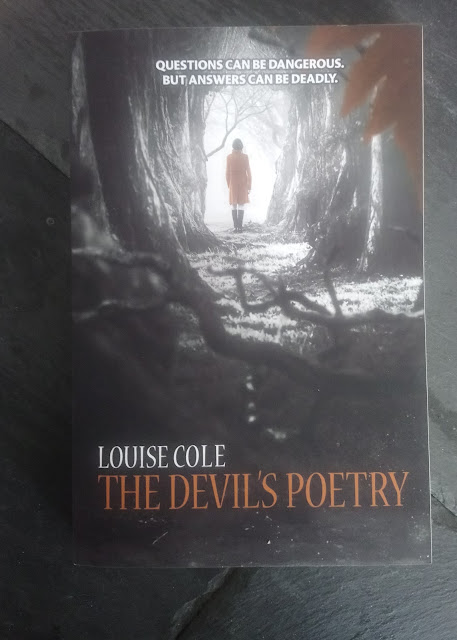 I had no idea what to expect from this book when I started it. I didn't even know what genre it was. However, Louise's beautiful writing quickly drew me into her story. It turns out that it's set in a near-future, where wars are breaking out around the world, conscription is back and causing turmoil in a Yorkshire high school, and the fate of the world rests on some upcoming peace talks in London. It's a really interesting setting and one we don't see very often in YA. Not quite contemporary, but definitely not dystopian.


Callie is a wonderful heroine. From the start it's clear that she's not your typical teenage girl, but the reasons for this, and her family history, unfold slowly through the novel. There's a lot of emphasis on the relationships in her life, with her best friend Amber and with her father, through to her crush and then developing feelings for the incredibly heroic and swoonworthy Jace. I really liked the fact that she had doubts and fears, and has to somehow face them. Her vulnerability and uncertainty make her feel all the braver.

There's also a strong supernatural element to the book. It's hard to define exactly, and I believe that it's been kept deliberately vague, either to deepen the sense of mystery or for exploration in further books. There's an ancient, semi-religious power at work, though it's exact purpose and how it works is shrouded in myth and mystery.

One of the things I particularly loved about The Devil's Poetry is the way there's no clear good or bad sides at work here. There are different sides, they each have their own beliefs and their own objectives and they each believe that they are right. This is mirrored very effectively in the ongoing peace talks, where both India and Pakistan are firmly convinced that they are in the right. Louise Cole approaches this with great subtletly, initially setting it up so that it seems clear that the Cadaveri are the evil monsters and the Order are the heroes, and then throwing other characters into the mix that will leave you questioning everything.

I can highly recommend The Devil's Poetry as an intricate, complex YA novel that will suck you in and leave you doubting everything.


I was sent an e-book copy by the author in return for a fair review.

I'm giving The Devil's Poetry four and a half moons.