She came from nothing.

Avery has a plan: keep her head down, work hard for a better future.

Then an eccentric billionaire dies, leaving her almost his entire fortune. And no one, least of all Avery, knows why.

Now she must move into the mansion she's inherited.

It's filled with secrets and codes, and the old man's surviving relatives - a family hell-bent on discovering why Avery got 'their' money.

Now there's only one rule: winner takes all.

Soon she is caught in a deadly game that everyone in this strange family is playing.

But just how far will they go to keep their fortune? 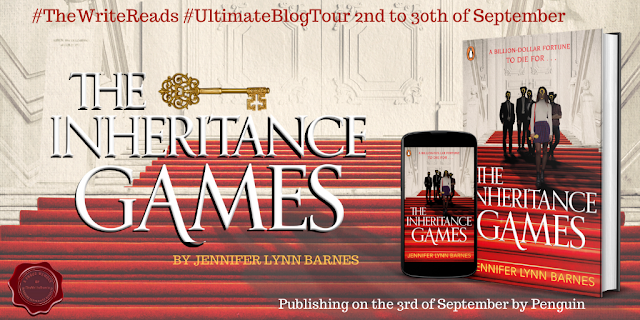 The Inheritance Games is a gripping, thrilling mystery. From the start to the last page, it had me hooked and desperate to know its secrets.

Avery is a very cool character. She's nicely set up from the first chapter as the kind of person who can do incredibly well in tests but usually does just enough to get by, not out of laziness but because she has so many other demands on her life. Then suddenly without warning she inherits a vast sum of money and has to live in her new house with the family of the old man who made her his heir, a family she really can't trust.

A lot of the story is about Avery adjusting to her new life, and the pressures and strains that suddenly becoming incredibly filthy rich brings, and it was fascinating seeing her being put through this by her new lawyers and security staff, how she changes and yet how she still remains very much the same person that made her so fascinating. Her relationship with her new tenants, the dispossessed Hawthornes was also really well done, veering between fascination and fear, curiosity and contempt.

Like a Gothic novel, the house itself played a big role in the story, a vast, complex, labyrinthine dwelling full of wonderful secrets and tricks. It's the kind of place I would adore to live, with its secret passages, huge libraries and so many other wonders. I would have happily read a whole novel of Avery just exploring the place to be honest.

But there's so much more to this. The central puzzle is why did Avery suddenly inherit Scrooge McDuck level wealth from someone she'd never heard of. This puzzle is brilliantly done. There are so many elements that are teased throughout, that I was constantly guessing, second guessing and doubting myself. The stream of puzzles the characters uncover and solve kept the plot racing along while the pieces were slowly falling into place and the conclusion was both very satisfying while leaving enough threads for the planned sequel.

All in all, I loved The Inheritance Games for its strong characters, gripping plot and fascinating locales.

A definite five moons, and please can I have the sequel already?

The Inheritance Games by Jennifer Lynn Barnes is published by Penguin and is available now.

I was sent a review copy by The Write Reads in return for participation in this blog tour and a fair and honest review.